A breakthrough therapy that protects manhood 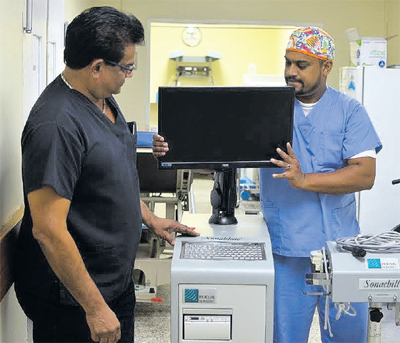 A major concern for men who have to undergo surgery and radiation treatment for prostate cancer is the possibility of erectile dysfunction afterwards, says urological surgeon Dr Fuad Khan.

However, Khan says he has a way to help men get rid of their prostate cancer without getting rid of their virility—High Intensity Focused Ultrasound (HIFU), a minimally invasive alternative to conventional therapies for the disease.

HIFU received third level approval from the United States’ Food and Drug Administration (FDA) in October 2015 but had been used outside of the US for years before that. T&T is the only country in the English speaking Caribbean that uses that treatment.

Khan has a Sonablate 500 machine to perform the procedure. It is a unique image-guided device that allows physicians to create a customised plan for each patient’s prostate needs. Ultrasound energy, or sound waves, is transmitted through the rectal wall and focused at desired locations within the prostate identified by MRI and confirmed by ultrasound. At the focal point of the sound waves, tissue temperature rapidly rises to almost 90 degrees Celsius destroying the targeted tissue while surrounding tissue remains unharmed.

Khan said the technique is safe.

“It’s completely new and anything that is new people would scoff at it,” he explained.

So far, 15 people have undergone therapy for prostate cancer using the HIFU.

“Every single person who has done the other modalities have lost their erections and it is something that nobody talks about. They don’t talk about it, they push it under the carpet, they tell you you could use Viagra or Cialis,” Khan said.

“However all the patients we have done so far (using the HIFU) have not only gotten rid of the tumours but those who had good erections have maintained their erections and they are happy.”

He warns, however, that if a patient’s erections were “no good before”, the HIFU will not miraculously make it better.

Apart from erectile dysfunction, there are other complications from surgery and radiation, Khan said.

“What we say in medicine is don’t let the treatment be worse than the disease and sometimes that is what we see,” he said.

With HIFU therapy patients are placed under spinal or general anaesthesia while a probe is placed in their rectum. Real-time images of the prostate and surrounding areas are then transmitted on a computer screen and from these images doctors plan where the ultrasound energy will be delivered.

Tumours are dissolved using ultrasound energy and there is no pain during the treatment. It is a day case surgery and patients can do it in the morning and leave the hospital by evening. This is what attracted Khan to the HIFU a decade or so ago.

“When I went to see it in the Dominican Republic almost ten years ago I was shocked. Some guys came from the United States stayed in a hotel, went into the nursing home, they did the HIFU, and they left went back to the hotel and were normal the next day. It is that good,” he said.

Khan said if he is ever faced with a prostate cancer problem he will opt for HIFU.

There are, however, specific criteria for patients hoping to undergo HIFU to get rid of prostate cancer. The tumour must be localised to the prostate and must be within a specified size range.

Khan said unlike radiation HIFU is non-ionizing so it can be repeated if necessary without damaging healthy tissue.

“Sometimes after radiation when it is done people still have the tumour, it returns. HIFU is the only thing that could actually be done again. The others you cannot do it. You cannot do over radiation. When it is finished you have to go for chemotherapy,” he said.

“Anybody who has had failed radiotherapy and failed brachytherapy we could do this rather than injecting you with all the drugs because the drugs have side effects also.”

Khan advised men to be tested for prostate cancer.

“Prostate cancer is not a death sentence if handled earlier. In fact you can live a normal life even if you are diagnosed with prostate cancer,” he said.